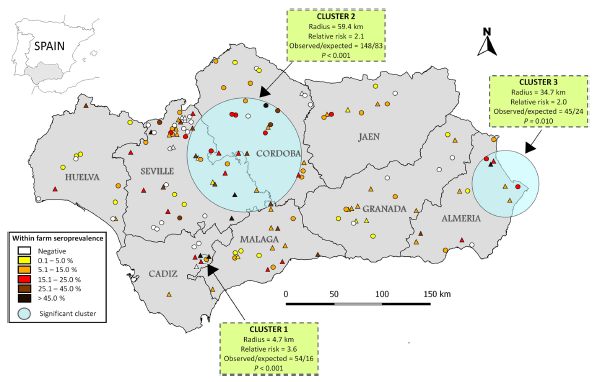 Paratuberculosis is a worldwide, chronic infectious disease caused by Mycobacterium avium subsp. paratuberculosis (MAP) that mainly affects ruminant species. This disease has a significant economic impact on small ruminant production due to the costs of implementing control measures and production losses. A cross-sectional study was carried out to determine the seroprevalence, spatial distribution and risk factors associated with MAP exposure in sheep and goats in Andalusia (southern Spain). Serum samples from 4134 small ruminants (2266 sheep and 1868 goats) in 153 flocks were tested by an in-house ELISA for antibodies against MAP using paratuberculosis protoplasmic antigen 3 (PPA3) as coating antigen. Antibodies against MAP were detected in 8.1% (183/2266; 95% CI: 7.0–9.2%) of sheep and 20.0% (374/1868; 95% CI: 18.2–21.8%) of goats. The true individual seroprevalence was 8.4% (95% CI: 6.9–10.1%) in sheep and 25.2% (95% CI: 22.7–27.8%) in goats. Seropositivity was detected in 66.3% (55/83; 95% CI: 56.1–76.4%) of sheep herds and 90.0% (63/70; 95% CI: 83.0–97.0%) of goat herds. Spatial analysis identified three statistically significant clusters (p < 0.05) associated with areas with higher seroprevalence of MAP. The main risk factors potentially associated with MAP exposure were: species (goat) and absence of perimeter livestock fencing. The results of this study show that MAP is widespread in small ruminant populations in southern Spain and suggest that goats may play a more important role than sheep in the transmission and maintenance of MAP. Because of animal health concerns and the economic consequences of paratuberculosis, appropriate surveillance and control programs are required to reduce the risk of MAP infections in small ruminant flocks in this country. 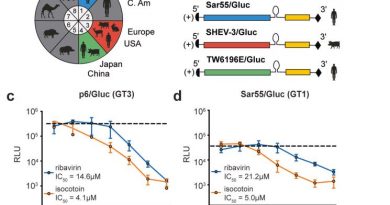 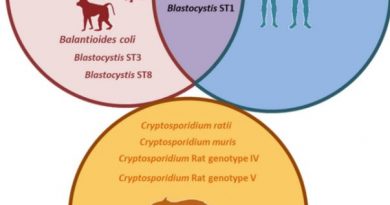 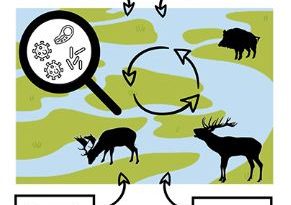