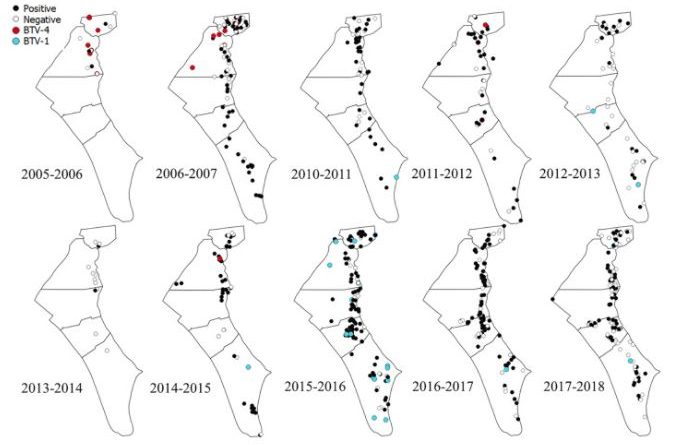 Bluetongue is a vector-borne disease affecting domestic and wild ruminants, with a major socioeconomic impact. Endemic circulation of the bluetongue virus serotype 4 (BTV-4) and BTV-1 have occurred in Spain since 2004 and 2007, respectively. However, epidemiological studies have seldom been approached from a long-term perspective in wild ruminants. A total of 881 deer (red deer and fallow deer) were necropsied from 2005 to 2018 as part of the DNP health-monitoring program. Serum samples were tested for antibodies against BTV with the aims of assessing the temporal trend and to evaluate the modulating factors: individual, populational, environmental, and stochastic. Red deer displayed statistically significant higher seroprevalences of BTV (SBT; 78.6 ± 3.8%) than fallow deer (53.1 ± 4.7%). The detection of BTV-1 and BTV-4 by the serum neutralization test in calves suggested the circulation of both serotypes over the study period. For red deer, wet years together with high densities could provide suitable conditions for vector borne BTV transmission. Moreover, proximity to high suitability habitat for Culicoides, permanent pasturelands, was associated with higher SBT. The differences in the ecology and behaviour of deer species influencing the exposure to the vectors could determine the differences found in the SBT patterns. This study evidences the role that deer species may play in the maintenance of BTV, however, elucidating the epidemiological role of host in different contexts as well as the consequences of climate change on the competent vector populations and its potential effect on the dynamics of BTV infection in hosts communities deserve further research. 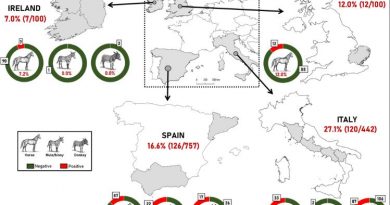 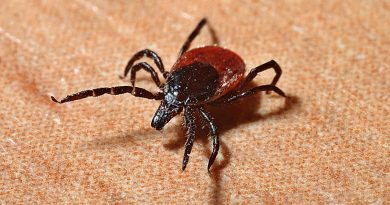